Conviction was a television drama series from NBC that premiered in March 2006. It focused on a group of young, up-and-coming Manhattan Assistant District Attorneys. The series took place in the same continuity as the other Law & Order series, but focused more on the lives of the characters, unlike the other crime- and trial-based series, so its title did not include "Law & Order". Actress Stephanie March reprised her role as Alexandra Cabot, an Assistant District Attorney introduced in Law & Order: Special Victims Unit. 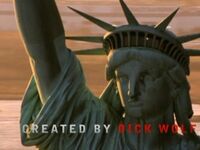 Retrieved from "https://lawandorder.fandom.com/wiki/Conviction?oldid=122411"
Community content is available under CC-BY-SA unless otherwise noted.