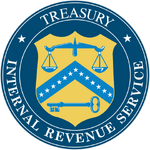 The Internal Revenue Service, commonly known as the IRS, is an agency of the United States Government charged with collecting revenue and enforcing the nation's tax laws. It is a part of the Department of the Treasury.

It has the power to freeze bank accounts for failure to pay taxes. It did so in the case of Sydney Markham, and believed that it had told him how to remedy the situation. The IRS was unaware that it was actually communicating with Didier Foucault, who was impersonating Markham. (CI: The Extra Man)

Retrieved from "https://lawandorder.fandom.com/wiki/Internal_Revenue_Service?oldid=137156"
Community content is available under CC-BY-SA unless otherwise noted.